Advances of IP routing and Cloud

With the introduction and hype around Software Defined Networking ( SDN ) and Cloud Computing, one would assume that there has been little or no work with the advances of IP routing. You could say that the cloud has clouded the mind of the market. Regardless of the hype around this transformation, routing is still very much alive. Packets still need to get to its destinations.

The Internet Engineering Task Force (IETF) develops and promotes voluntary internet standards, in particular the standards that comprise the Internet Protocol Suite (TCP/IP). The IETF shapes what comes next and this is where all the routing takes place. It focuses on anything between the physical layer and the application layer. It doesn’t focus on the application itself but on the technologies used to transport the application, for example HTTP.

In the IETF, no one is in charge, anyone can contribute and everyone can benefit.

As you can see from the chart below, that routing ( rtg ) has over 250 active drafts and is the most popular working group within the IETF. 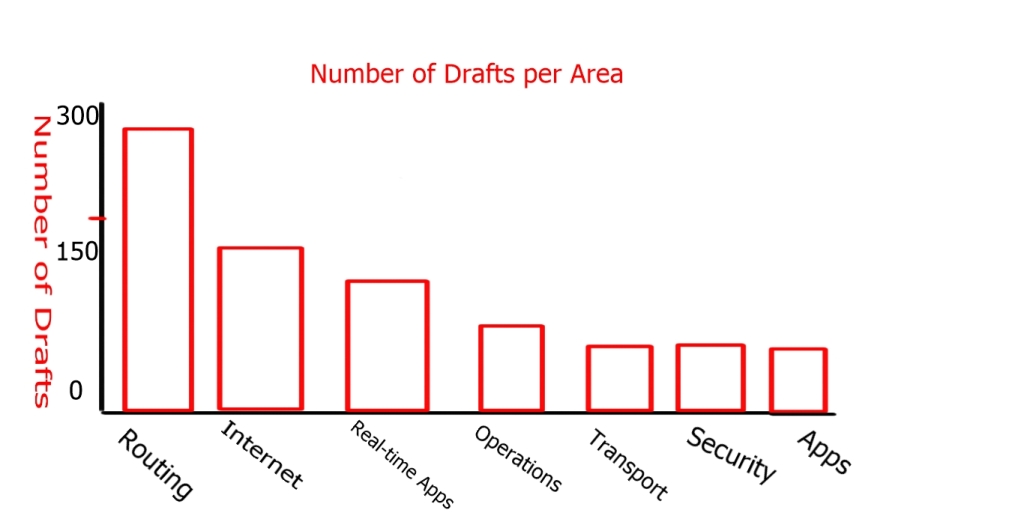 The routing area is responsible for ensuring continuous operation of the Internet routing system by maintaining the scalability and stability characteristics of the existing routing protocols, as well as developing new protocols, extensions, and bug fixes in a timely manner.

The following table illustrates the subgroups of the rtg working group:

The chart below displays the number of drafts per subgroup of the routing area. There has been a big increase in the subgroup “roll” and is second in place to BGP. “Roll” relates to “Routing Over Low power and Lossy networks” and is driven by the Internet of Everything and Machine-to-Machine communication. 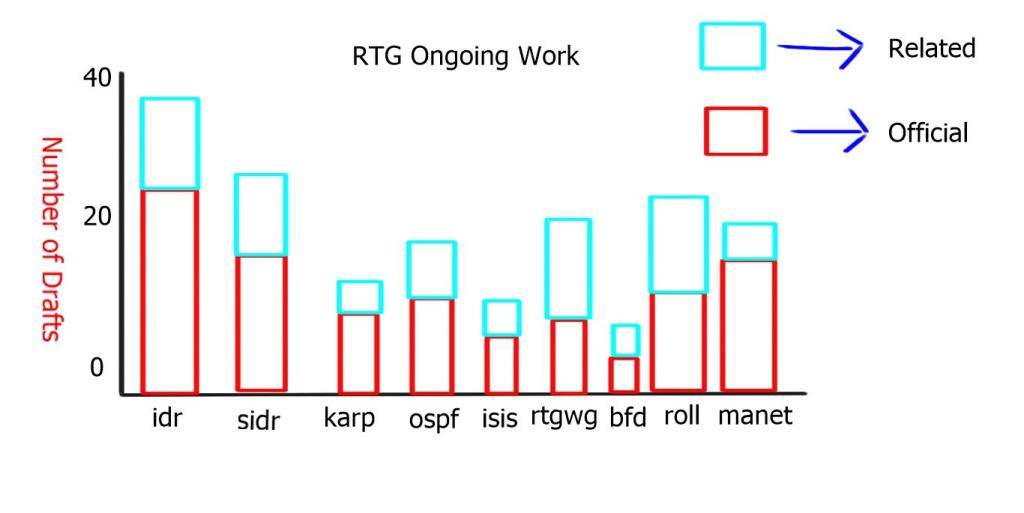 OSPF is a link state protocol that uses a common database to determine the shortest path to any destination. 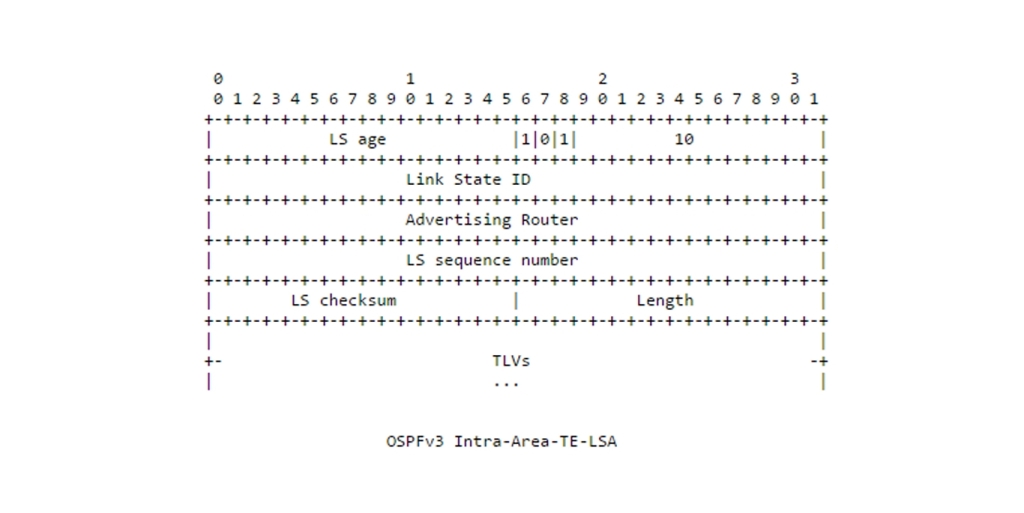 Another shortcoming of OSPF is that by default it does not install a backup route in the routing table. Having a pre-installed backup up path greatly improves convergence time. With pre calculated backup routes already installed in the routing table the routers process does not need to go through the LSA propagation and SPF calculation steps of the convergence process.

In the diagram below:

-Link State allows Router A to know the entire topology

-Router A should know that Router B is an alternative path. Router B is a Loop Free Alternate for destination 10.1.1.0/24 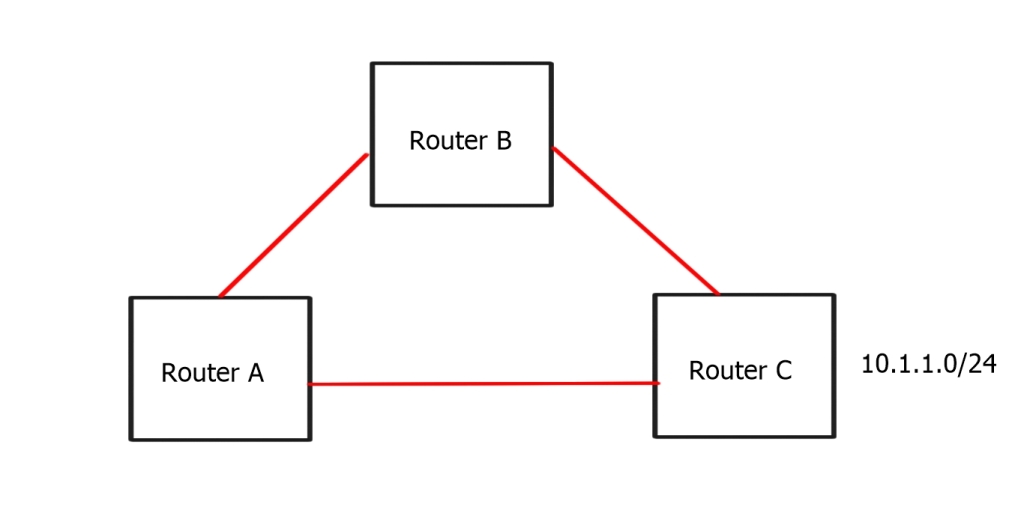 This is not done with any type of tunneling and the backup route needs to exist for it to be used by the RIB. If the second path doesn’t exist in the first place, the OSPF process cannot install an Loop-Free Alternative. The LFA process does not create backup routes if they don’t already exist. An LFA is simply an alternative loop-free route as calculated at any router in the network.

A drawback with LFA is that it cannot work in all topologies. This is most notable in RING topologies. The answer is to tunnel and to get the traffic past the point where it will loop. This effectively makes the RING topology a MESH topology. In the diagram below, it does this by recognizing that we have to tunnel traffic from A to C. The type of tunnel doesn’t matter – it could be GRE tunnel, an MPLS tunnel, an IP-in-IP tunnel, or just about any other encapsulation.

Router A must forward traffic directly to C in order to prevent packets from looping back.

In the preceding example we will look at “Remote LFA” that leverages an MPLS network and Label Distribution Protocol ( LDP ) for label distribution. If you use Traffic Engineering ( TE ), its called “TE Fast ReRoute” and not “Remote LFA”. There is also a hybrid model that combines both Remote LFA and TE Fast ReRoute and is used only when the above cannot work efficiently due to a complex topology or corner case scenario.

– Since C is not directly connected, Router A must tunnel to C

a) Router A begins forwarding traffic along the LDP path

Remote LFA have some topology constraints. For example, they cannot be calculated across a flooding domain boundary i.e an ABR in OSPF or L1/L2 boundary is IS-IS. However, they do work in about 80% of all possible topologies and 90% of production topologies.

BGP is a scalable distance vector protocol that runs on top of TCP. Its uses a path algorithm to determine the best path to install in the IP routing table and use for IP forwarding.

One drawback to the default BGP behavior is that it only advertises the best route. When a BGP Route Reflector receives multiple paths to the same destination it will advertise only one of those routes to its neighbors.

This can limit the visibility in the network and affect the best path selection used for hot potato routing when you want traffic to leave your AS as quickly as possible. All paths to exit an AS are not advertised to all peers, basically hiding ( not advertising ) some paths to exit the network.

The diagram below display default BGP behavior, the RR receives two routes from PE2 and PE3 about destination Z, due to the BGP best path mechanism it only advertises one of those paths to PE1. 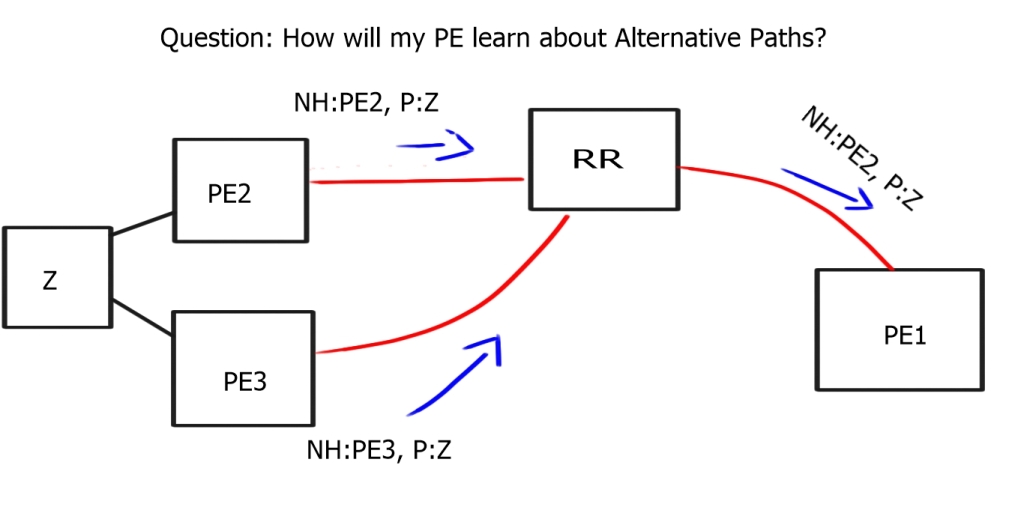 In certain design you could advertise the destination CE with different Route Distinguishers ( RD’s ), essentially creating two instances for the same destination prefix. This would allow the RR to send two paths to PE. 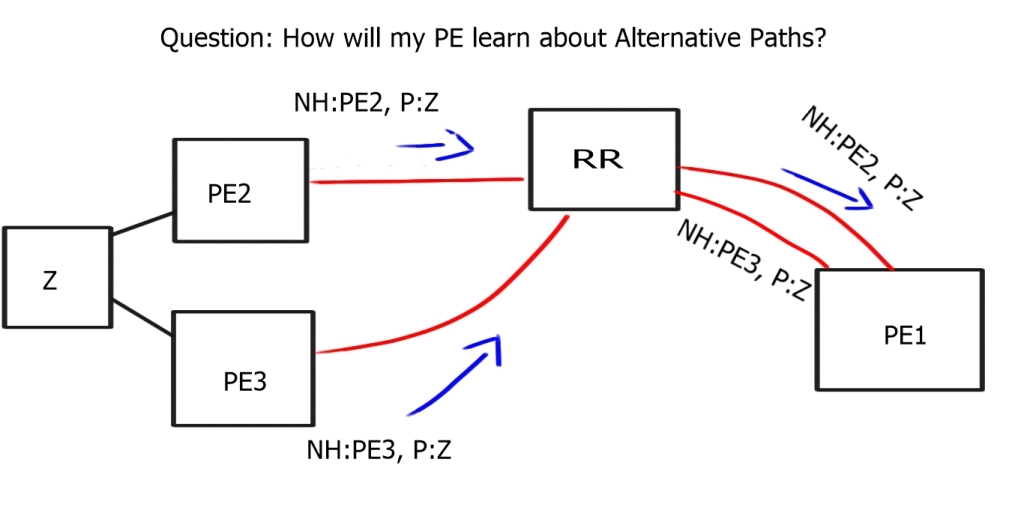 A special extension to BGP known as “Add Paths” allows BGP speakers to propagate and accept multiple paths for the same prefix. The BGP Add-Path feature will signal diverse paths so you don’t need to create shadow BGP sessions.

There is a requirement that all Add-Path receiver BGP routers must support the Add-Path capability.

There are two flavors of the Add-Path capability, Add-n-path and Add-all-path . The “Add-n-path” will add 2 or 3 paths depending the IOS version. With “Add-all-path”, the route reflector will do the primary best path computation (only on first path) and then send all paths to the BR/PE. This is useful for large ECMP load balancing, where you need multiple exist paths for hot potato routing. 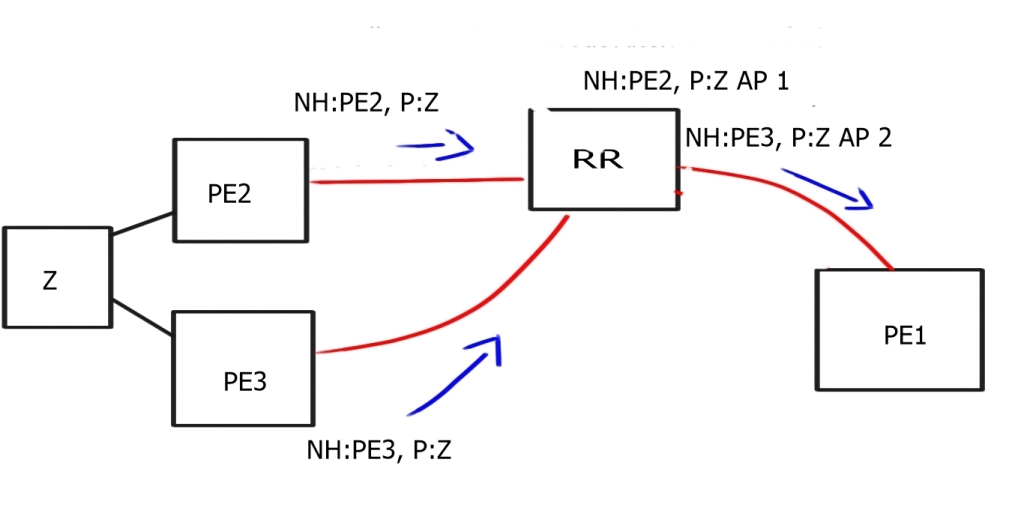 Segment routing leverages the MPLS data plane i.e push, swap and pop controls without the need for LDP or RSVP-TE. This avoids millions of label in the LDP database or TE LSP’s in the networks. 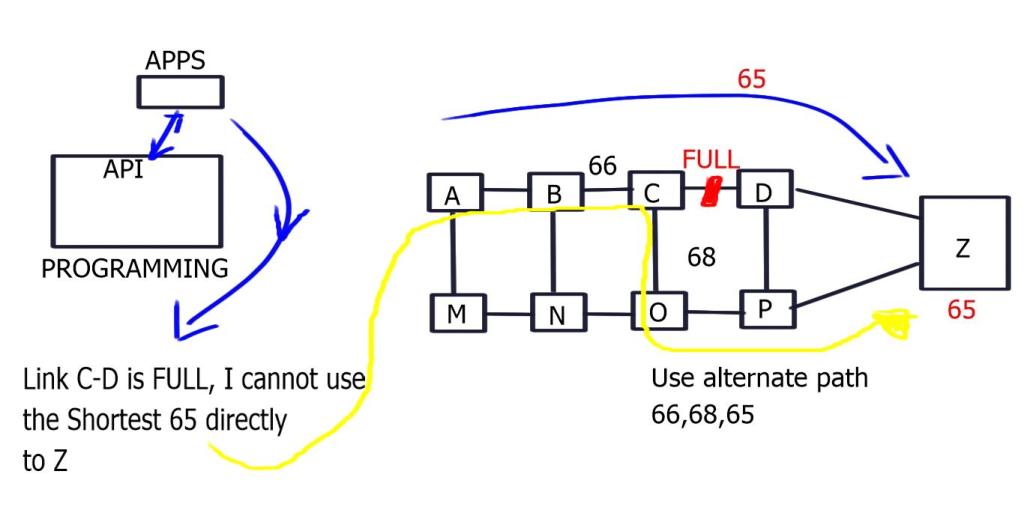 The complexity and state is now isolated to the edges of the network and the middle nodes are only swapping labels. The source routing is based on the notion of a 32 bit segment that can represent any instructions such as service, context, IGP-based forwarding construct. This results in an ordered chain of topological and service instructions where the ingress node pushes the segment list on the packet.

The concept of BGP hijacking revolves around locating an ISP that is not filtering advertisements or its misconfiguration makes it susceptible to a man in the middle attack. Once located, an attacker can advertise any prefix they want, causing some or all traffic to be diverted from the real source towards the attacker.

in February 2008, a large portion of YouTube’s address space was redirected to Pakistan when the Pakistan Telecommunication Authority ( PTA ) decided to restrict access to YouTube.com inside the country, but accidentally blackholed the route in the global BGP table.

These events and others has led the Secure-Inter Domain Routing Group ( sidr ) to address the following two vulnerabilities in BGP:

-Is the AS authorized to originate an IP prefix?

-Is the AS-Path represented in the route the same as the path through which the NLRI traveled?

This lockdown of BGP has 3 solution components:

The table below displays the RPKI Deployment State;

The clouds of today have crossed well beyond the initial hype and applications are now offered as on-demand services ( anything-as-a-service [XaaS] ). These services are making significant cost savings and the cloud transition is shaping up to be as powerful as the previous one – the Internet. The two new big clouds of the future are the Intercloud and the Internet of Things.

If you’d like to learn more about cloud computing strategies and other solutions offered by Amazon Web Services, you might want to consider attending something like this AWS Course in Pune.

Currently, the cloud market is driven by two spaces – public cloud ( off premise ) and the private cloud ( on premise ). The intercloud takes the concept of cloud much further and attempts to connect multiple public clouds together. A single application that could integrate services and workloads from ten or more clouds would create opportunities and has the potential to significantly alter the landscape of the cloud market.

We are already beginning to see signs of this in the current market. Various applications, such as Spotify and Google Maps are authenticating unregistered users with their Facebook credentials. Another use case, is a cloud IaaS provider could divert incoming workload to another provider if it doesn’t have the resources to serve the incoming requests, essentially cloud bursting from provider to provider. It would also make economic sense to move workload and services between different cloud providers based on cooling costs ( follow the moon ). Or maybe dynamically move workloads between providers so they are closest to the active user base ( follow the sun ) 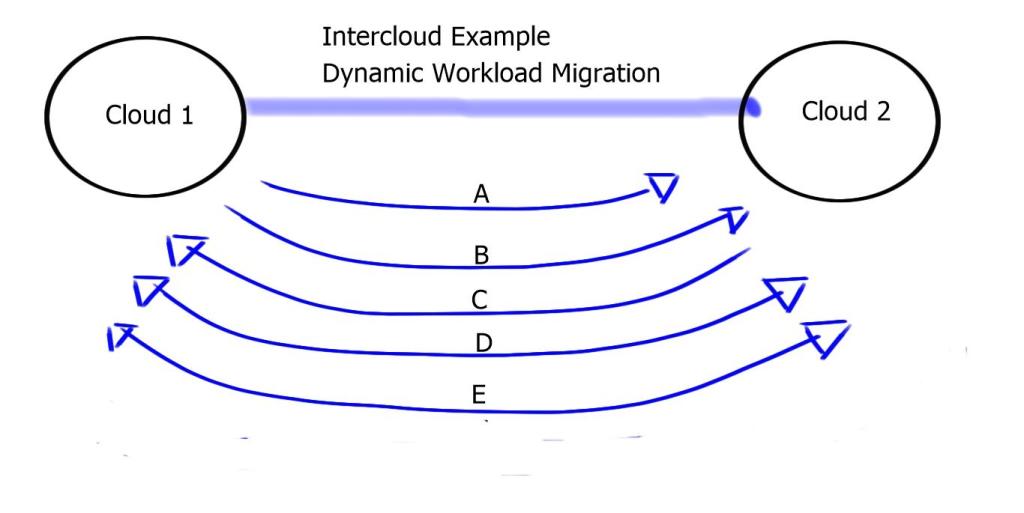 The concept of Intercloud was difficult to achieve with previous version of vSphere based on the restriction of latency for vmotion to operate efficiently. Now vSphere v6 can tolerate 100 msec of RTT.

The Inter Cloud is still a conceptual framework and the following questions need to be addressed before it can be moved from concept to production.

The One Platform Kit is Cisco’s answer to Software Defined Networking. It aims to provide simplicity and agility to a programmatic network. It’s basically a set of API driven by programming languages, such as C and Java that are used to program the network. We currently have existing ways to program the network with EEM amplets but we lack an automation tool that can program multiple devices at once. It’s the same with Performance Routing ( PfR ). PfR can program and traffic engineer the network by remotely changing metrics but the decision are still local and not controller based.

One very useful element of the Cisco’s One Platform Kit is its ability to performance “Off the box” traffic engineering i.e the computation is made outside of the local routing device. It offers you the ability to create your own route paths throughout the network without relying on default routing protocol behavior. For example, the default metric for route selection for equal length routes in OSPF is cost. This cannot be changed which makes the routing decisions very static. The Cisco’s One Platform Kit (onePK) allows you to calculate routes using different variables that you set, giving you complete path control.