This is a two-part post – Part 1 introduces challenges of traditional WAN’s and Part 2 (this post) describes Nuage Networks SD-WAN solution.

Traditional WAN’s hinder business operation and don’t meet the demands of today’s applications. A new emerging WAN architecture called SD-WAN replaces existing WAN’s with a business aware approach to networking. This approach is now thoroughly adopted by Nuage Networks and their SD-WAN solution is solving the limitations of conventional WAN’s.

Nuage Networks SD-WAN offers a centralised solution, adding intelligence to the WAN in terms of forwarding, policy and monitoring. Nuage understands all the existing WAN pitfalls and their SD-WAN solution enables policy based traffic forwarding. If you make routing aware of the application you can steer traffic down different links based on business logic, not just on destination based forwarding.

Nuage Networks are one of the first companies to incorporate the WAN edge to the data centre, enabling one large network fabric and management entity. The entire solution is called Virtualized Network Services (VNS), which uses many components from the existing Virtualized Service platform (VSP). The WAN is no longer managed by itself with complex control planes, Policy Based Routing (PBR), IP SLA, enhanced object tracking and per link QoS configurations. As the WAN is now combined to the internal data center it can be managed as one entire entity via a central controller, known as Virtualized Services Controller (VSC) and a policy engine known as Virtualized Service Directory (VSD). 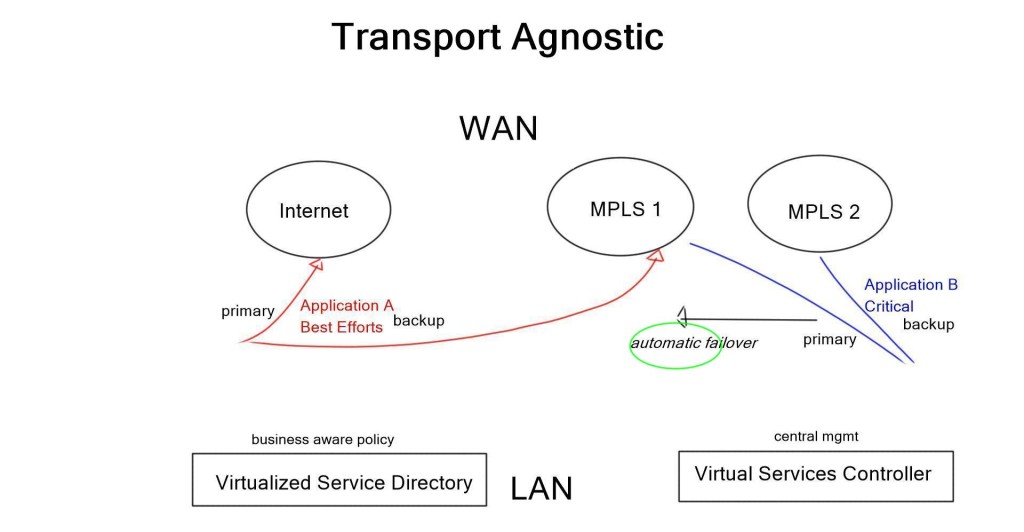 A central viewpoint now has the capability to set policy based on business logic. Policies are then pushed down to the end nodes, known as Network Service Gateways (NSG) to carry out data plane forwarding. All these components combined together create an overlay network – a network built on top of another network. Overlay networking provides flexible topologies, allowing the application to control the network, not the network controlling the application.

Nuage’s SD-WAN solution might be new but the control plane functions have been lifted from the 15 year old source code of the 7750 SR Alcatel-Lucent routers. This provides network engineers with the comfort of knowing the IP stack is robust and proven in some of the largest global networks.

Nuage employs intelligent product design principles and do not try to reinvent the wheel. They use proven and field tested protocols as much as possible. Virtual Extensible LAN (VXLAN) and Internet Protocol Security (IPsec) are employed to form the Layer 2 & Layer 3 overlay. For scale out controller clustering, MP-BGP is implemented between controllers. MP-BGP is an enhancement to native BGP. BGP supports only unicast IPv4, while MP-BGP supports a wide variety of protocols. It is extensible and can carry a wide variety of information. The data plane NSG nodes are based on the popular Open vSwitch but optimized for enhanced performance. For optimized flow forwarding Nuage decided to implement OpenFlow with proprietary extensions.

“This post is sponsored by Nuage Networks. All thoughts and opinions expressed are the authors”