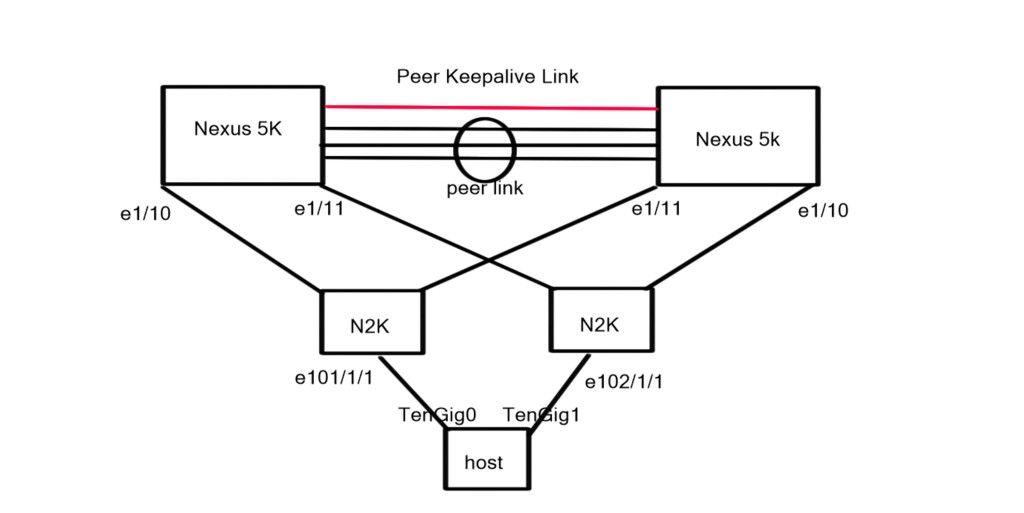 Part1. Connecting the FEX to the Parent switch:

The FEX and the parent switch use Satellite Discovery Protocol (SDP) periodic messages to discovery and register with one another.

When you initially log on to the Nexus 5K you can see that the OS does not recognise the FEX even though there are two FEXs that are cabled correctly to parent switch. As the FEX is recognised as a remote line card you would expect to see it with a “show module” command.

Notice in the output below there is only “fex:Sdp-Rx” messages.

The FEX appears as “DISCOVERED” but no additional FEX host interfaces appear when you issue a “show interface brief“.

The Fabric interface Ethernet1/10 show as DOWN with a “FEX not configured” statement.

To enable the parent switch to fully discover the FEX we need to issue the “switchport mode fex-fabric” under the connected interface. As you can see we are still not sending any SDP messages but we are discovering the FEX.

The next step is to enable the FEX logical numbering under the interface so we can start to configure the FEX host interfaces. Once this is complete we run the “debug fex pkt-trace” and we are not sending TX and receiving RX SDP messages.

From the “debug fexpkt-race” you can see the parent switch is now sending TX SDP messages to the fully discovered FEX.

Now the 101 FEX status changes from “DISCOVERED” to “ONLINE”. You may also see an additional FEX with serial number SSI165204YC as “DISCOVERED” and not “ONLINE”. This is due to the fact that we have not explicitly configured it under the other Fabric interface.

By default, the FEX interfaces will send out a couple of BPDU’s on start-up.

Issue the commands below to determine the transceiver type for the fabric ports and also the hosts ports for each fabric interface.

Static Pinning is when you pin a number of host ports to a fabric port. If the fabric port goes down so do the host ports that are pinned to it. This is useful when you want no oversubscription in the network.

Once the host port shut down due to a fabric port down event, the server if configured correctly should revert to the secondary NIC.

Now we shut down fabric interface E1/10, you can see that Eth101/1/1 has changed its operation mode to DOWN. The FEX has additional connectivity with E1/11 which remains up.

Port Channels can be used instead of static pinning between parent switch and FEX so in the event of a fabric interface failure all hosts ports remain active.  However, the remaining bandwidth on the parent switch will be shared by all the host ports resulting in an increase in oversubscription.

Straight-Through: The FEX is connected to a single parent switch. The servers connecting to the FEX can leverage active-active data plane by using host vPC.

Shutting down the Peer link results in ALL vPC member ports in the secondary peer become disabled. For this reason it is better to use a Dual Homed.

In active – active, a single parent switch failure does not affect the host’s interfaces because both vpc peers have separate control planes and manage the FEX separately.
For the remainder of the post we are going to look at Dual Homed FEX connectivity with host Vpc.

The first step is to check the VPC peer link and general VPC parameters.

Command: “show vpc brief“. Displays the vPC domain ID, the peer-link status, the keepalive message status, whether the configuration consistency is successful, and whether peer-link formed or the failure to form

Command: “show vpc peer-keepalive” Displays the destination IP of the peer keepalive message for the vPC. The command also displays the send and receives status as well as the last update from the peer in seconds and milliseconds

To execute reachability tests, create an SVI on the first parent switch and run ping tests. You must first enable the feature set “feature interface-vlan”. The reason we create an SVI in VLAN 10 is because we need an interfaces to source our pings.

Do the same tests on the second Nexus 5K.

Shut down one of the FEX links to the parent and you see that the FEX is still reachable via the other link that is in the port channel bundle.