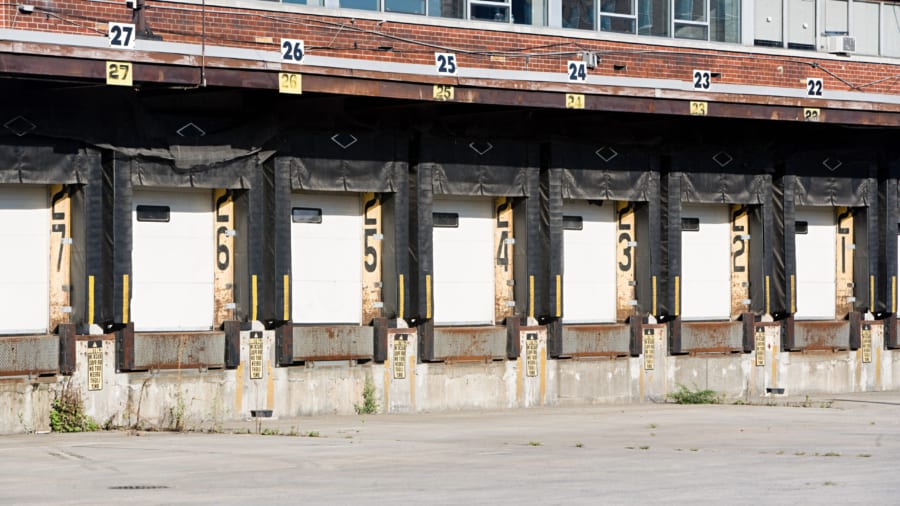 Local Traffic Manager (LTM) is part of a suite of BIG-IP products that adds intelligence to connections by intercepting, analyzing, and redirecting traffic. Its architecture is based on full proxy mode, meaning the LTM completely understands the connection, enabling it to be an endpoint and originator of client and server-side connections. All kinds of proxies are it full or standard act as some kind of gateway from one network to another. They sit between two entities and mediate connections. The difference in proxy architecture becomes apparent with their distinctions in flow handling.

Full-proxy offers a lot more granularity by implementing dual network stacks for client and server connections. Essentially, creating two separate entities with two separate session tables – one on the client side and another on the server side. The BIG-IP LTM device manages the two sessions independently. The connections between the client and the LTM are different and fully independent of the connections between the LTM and the backend server. The result is that each connection has its own TCP behaviors and optimizations. 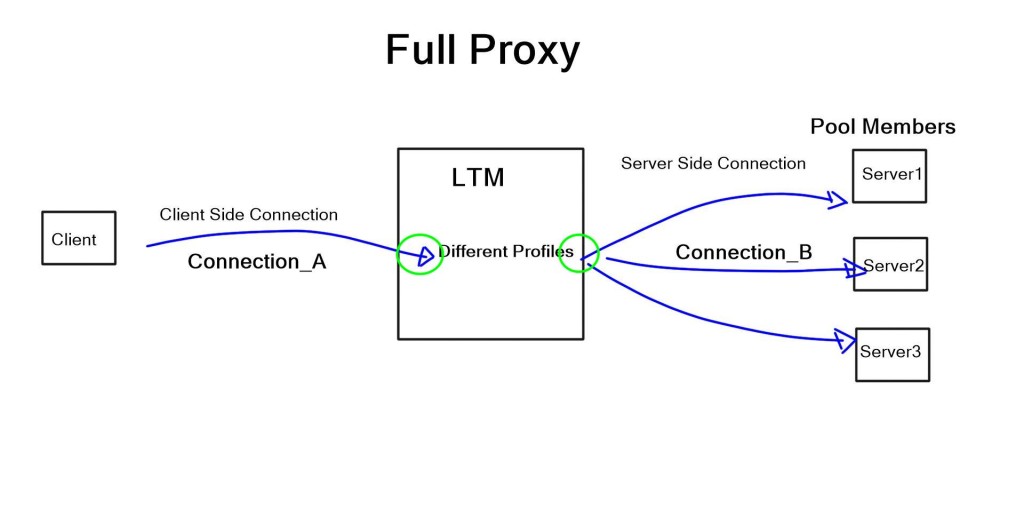 Response traffic must flow back through the LTM to make sure that the translation can be undone. For this to happen servers (pool members) use LTM as their Default Gateway. Any off-net traffic flows through the LTM. What happens if requests come through the BIG-IP, but the response goes through a different default gateway?

The source address will be the responding pool member but the sending client does not have a connection with the pool member, it has a connection to the VIP located on the LTM. In addition to doing destination address translation, the LTM can also do Source address translation (SNAT). This forces the response back to the LTM and for the transitions to be undone. It is common to use the Auto Map Source address Selection feature- the BIG-IP selects one of its “self” IP addresses as the IP for the SNAT. 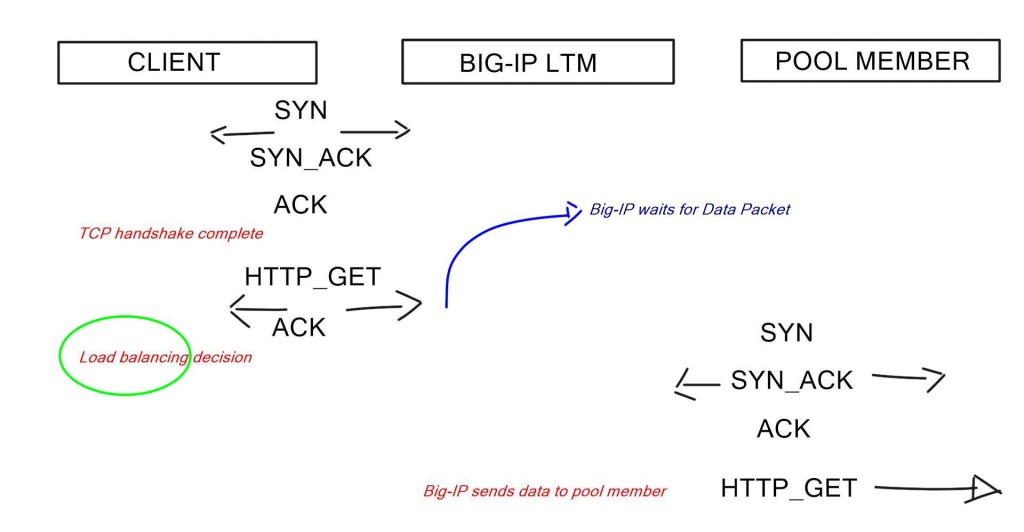 LMT forwards the HTTP GET requests to the Pool member.

When the client to LTM handshake completes, it waits for the initial HTTP request (HTTP_GET) before making a load balancing decision. Then it does a full TCP session with the pool member, but this time the LTM is the client in the TCP session. For the client connection, the LTM was the server. The reason the BIG-IP waits for the initial traffic flow to set up the load balancing is to mitigate against DoS attacks and preserve resources. As discussed, all virtual servers have different packet handling techniques. For example, with the performance virtual server, clients send initial SYN to the LTM. The LTM system makes the load balancing decision and passes the SYN request to the pool member without completing the full TCP handshake.

In this case, Ratio load balancing can be used to distribute traffic unevenly, based on predefined ratios. For example, Ratio 3 is assigned to servers 1 and 2, and Ratio 1 is assigned to servers 3. The result of this configuration is that for every 1 packet assigned to server 3, both servers 1 and 2 will get 3. Initially, it starts with a round-robin but then subsequent flows are differentiated based on the ratios. A feature known as priority-based member activation allows you to configure pool members into priority groups. High priority gets more traffic. For example, you group the two high spec servers (server 1 and server 2) in a high priority group and a low spec server (server 3) in a low priority group. The old server will not be used unless there is a failure in priority group 1.

Health and performance monitors are associated with a pool to determine if servers are operational and able to receive traffic. The type of health monitor used depends on the type of traffic you want to monitor. There are a number of predefined monitors and you can also customize your own. For example, LTM attempts to FTP download a specified file to the /var/tmp directory, and if the file is retrieved, the check is successful. Some HTTP monitors permit the inclusion of a username and password to retrieve a page on the website. You also have LDAP, MYSQL, ICMP, HTTPS, NTP, Oracle, POP3, Radius, RPC, and many others. iRules allows you to manage traffic based on business logic. For example, you can direct customers to the correct server based on language preference in their browsers. An iRule can be the trigger to inspect this header ( accept-language) and select the correct pool of application servers based on the value specified in the header.

When the LTM receives the HTTP request from the client, it makes the load balancing decision before the “Oneconnect”  profile is considered. If there are no OPEN or IDLE server-side connections, the BIP-IP creates a new TCP connection to the server. When the server responds with the HTTP response the connection is left open on the BIP-IP for reuse. The connection is held in a table buffer known as the connection reuse pool. New requests from other clients can reuse the OPEN IDLE connection, not needing to set up a new TCP connection. The source mask on the OC profile determines which clients can reuse open and idle server-side connections. If you are using SNAT, the source address is translated first before the OC profile is applied.