The Internet is in transformation. Initially, we started with the Web and digitized content. The market then moved to tracking and controlling the digitized world with for example General Packet Radio Service ( GPRS ). Machine-to-Machine ( M2M ) introduces a completely different connectivity model and application use case. And now we embark on Machine Learning where machines have the capability to make decisions with either supervised or unsupervised controls. This transformation requires new types of architectures and technologies. Traditional networks start with a group of network devices and box-by-box mentality. The perimeter was more a less static. The move to Software Defined Networking ( SDN ) implements a central controller, pushing networking into software. Now, as the IoT world steadily gains pace we require an application-centric model with distributed intelligence and time series data.

IoT enables everyday physical objects, such as plants, people, animals, appliances, objects, buildings, machines to transmit and receive data. The practical use case for IoT bounds only to the limits of our imagination. The devices section is where will we see the most innovation and creativity. There has been plenty of traction in the car industry as IoT introduces a new era of hyperconnected vehicles. Connected cars in a mesh of clouds form a swarm of intelligence. The ability to retrieve data from other vehicles opens up new types of safety information such as black ice and high winds detection. 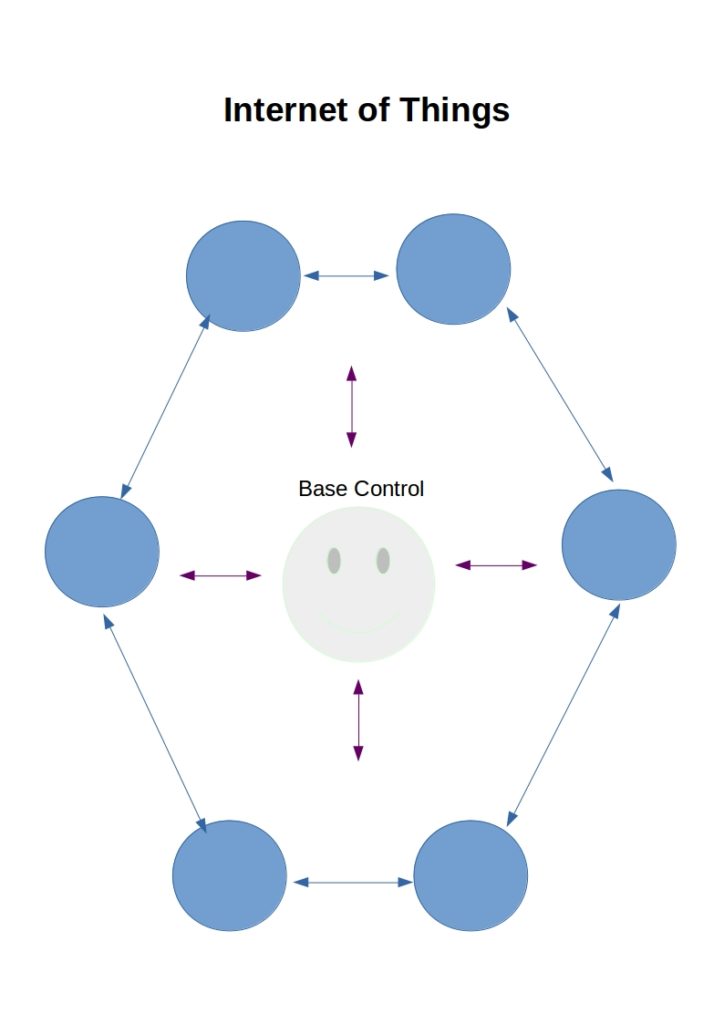 No one can doubt that the Internet has a massive impact on society. This digital universe enables all types of mediums to tap in and communicate. In one way or another, it gets woven into our lives, maybe even to the point where people decide to use the internet as a base point in starting their own business. Being able to work with a digital eCommerce software will be able to help you sell digital downloads to your clients to help you compete with the bigger companies in the industry. So the internet has the ability to change your life. More importantly, the Internet is a product made by “people”. However, we are heading into a transformation stage that will make our current connectivity model look trivial. The Internet of things drives a new Internet, a product that is made by “things”, not just people. These things or smart objects consists of billions or even trillions of non-heterogeneous devices. The ability for devices to sense, communicate, and acquire data help build systems that manage our lives better.

We are beginning to see the introduction of IoT into what’s known as smart cities. In Boston, there is an iPhone app called Catchthebusapp that informs application owners of location and arrival time of public transport vehicles. GPRS trackers installed on each vehicle inform users when they are running late. This example proves that we are about to connect our planet together enabling a completely new way to interact with our world. The ability to interact, learn, and observe people and physical objects is a huge leap forward. Culture being one of the main factors for resistance.

Due to the immaturity of IoT, there are concerns raised about its security and privacy. In response to these concerns, the Internet of Things Security Foundation started in 2015. There is such a rush to market with these new devices, security is often an afterthought. This obviously leaves holes and gaps for cyber criminals to exploit.

A recent article on the register claims that a Wi-Fi baby heart monitor may have the worst IoT security of 2016. All data between the sensor and base station is unencrypted meaning an unauthenticated command over HTTP can compromise the system. Channels must be encrypted to overcome information and physical tampering.

IoT also opens up a new type of DDoS attack called denial-of-sleep attacks that drain a device’s battery. Many of these devices are so simplistic in design both from a hardware and software perspective they don’t support sophisticated security approaches. Many IoT processors are not capable of supporting strong security and encryption.

IoT opens up the back door to potentially billions of unsecured devices used as a resource to amplify DDoS attacks. The Domain Name System ( DNS ) is an existing lightweight protocol that can address the IoT security concerns. It has the capabilities to tightly couple the detection and remediation of DDoS tasks. Analysing DNS queries with machine learning techniques predict malicious activity.

What is IoT & How does it work?

IoT is a concept, not a new technology. It connects data together so applications can derive results from viewing the analytics. It’s a complex environment and not a journey a single company can take on by themselves. For a complete end-to-end solution, partnerships need to be formed to offer a full data center to edge solution.

To have a thing be part of the Internet of things we must follow a few steps. At a very basic level, we have smart objects with the ability to “sense & communicate“. These objects must then have the ability to interact and collaborate with other things on the Internet. Each of these things or smart objects consists of a physical entity and digital function. The physicals include sensory capabilities to measure data such as temperature, vibration, pollution. Sensors transmit valuable data to an Internet of things Platform. The central IoT platform integrates data from many heterogeneous devices and shares the analytics to various applications addressing use cases that solve specific issues. The actuators are responsible for performing a specific task – opening a window or a lock, changing traffic lights etc

The type of device depict the chosen network connectivity. Essentially we have two categories : Wireless and Wired. A hospital would connect back to the control center with a wired connection ( Ethernet or Serial ) while other low-end devices might use a Low Power Short-Range network. If you have ever wondered “what is ethernet all about?”, it is essentially a way of connecting computers together in a local area network.Low Power Short-Range networks are useful for smart homes with the point-to-point, star and mesh topologies. Devices using this type of network range between tens to hundred of meters. They require long battery life, medium density, and low bandwidth. The device type really does depict the network. If you want the battery to last 10 years you need to right type of network for that.

Machine learning and IoT go hand in hand. With the sheer scale of IoT devices, there is simply too much data for the human mind to crunch. This results in the analysis carried out on the fly between devices or distributed between gateways at the edge. Fog computing pushes processing and computation power down to the actual device. This is useful if there are expensive satellite links and when its costs effective to keep computation power at the device level opposed to sending it over network links to the control center. It’s also useful when network communications increase the battery consumption in the sensor node. There are numerous companies who specialise in fog computing such as Vantiq, and as the IoT becomes more widely accepted and incorporated, we can expect to see a greater demand for fog computing systems.

Gartner released a report stating there will be over 20 billion devices participating on the internet of things by 2020. An individual person may have up to 5,000 devices to interact with. This type of scale would not be possible without the adoption of IPv6 and 6LoWPAN. 6LoWPAN stands for Low power Wireless Personal Area Networks. It enables small low-powered memory constrained devices the ability to connect and participate in IoT. Its base topology has a number of mesh type self-healing 6LoWPAN nodes connected to Edge router for connectivity and integration to the Internet. The edge routers act as a bridge between the RF and Ethernet network. A recent marketplace example is a wireless LED light bulb from LIFX.