In a VMware virtualized environment, we typically have a single host running multiple virtual machines (VM) through the VMkernel hypervisor. The physical host does not have enough network cards to allocate a physical NIC to every VM, there are exceptions, for example, Cisco VM-FEX, but generally speaking we have more virtual machines than physical networks cards. In order to get VM’s to communicate out an uplink or even to each other internally, we need a network of some kind to support communication flows. By implementing a Layer 2 switch within the ESXi hosts, traffic flowing from VM’s within the same VLAN is locally switched. Traffic across VLAN boundaries is passed to a security or routing device northbound to the switch. Possibilities for micro-segmentation and VM NIC firewalls exist, but let’s deal with them in a later article. Essentially, the virtual switch aggregates multiple VM’s traffic across a set of links as well as provide frame delivery between VM’s based on Media Access Control (MAC) address. 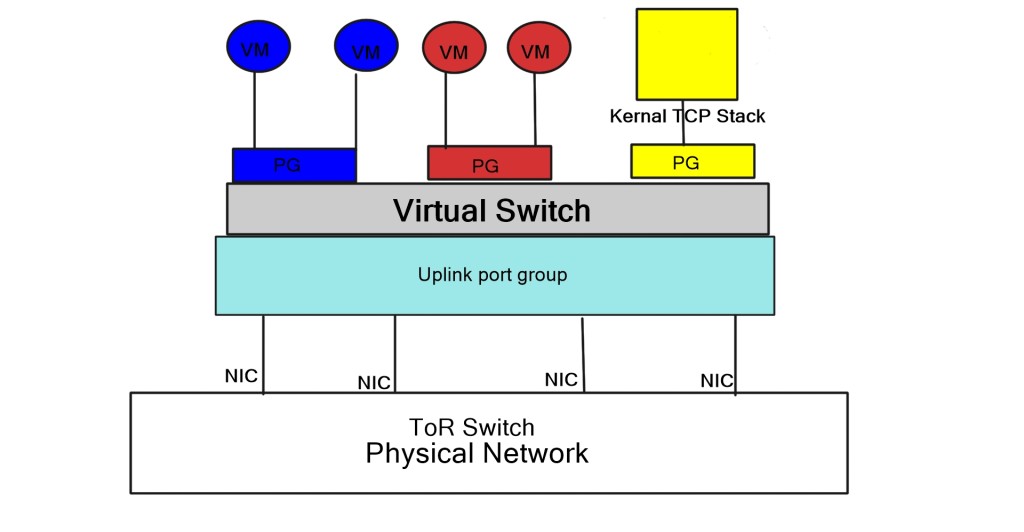 The diagram displays a virtualised environment with two sets of VM’s, blue and red, attached to corresponding Port Groups. Port Groups are nothing special, simply management groups based on configuration templates. You may have different VM’s in different Port Groups in the same VLAN communicate freely. The virtual NIC is a software construct emulated by the hypervisor.

The Standalone vswitch lacks advanced features but gains in performance. The standalone version is not a feature rich virtual switch and supports standard VLAN and control plane consisting of CDP. Each ESXi host has an independent switch consisting of its own data plane and control plane. Every switch is a separate management entity. The Distributed vswitch (vDS) is purely a management entity and minimizes the configuration burden of the standalone switch. It’s basically a template you configure in vCenter, applied to individual hosts. It enables you to view the entire network infrastructure as one object in the vCenter. The port and network statistics assigned to the VM move when the VM moves. The vDS is a simple management template and each ESXI host has its own control and data plane with unique MAC and forwarding rules. The local host proxy switch performs packet forwarding and running of control plane protocols. One major vDS drawback is if vCenter drops you cannot change anything on the local hosts. As a best design practice, most engineers use the standard standalone switch for management traffic and vDS for VM traffic on the same host. Each virtual switch (vS and vDS) must have its own set of uplinks. You need at least two uplinks for each switch for redundancy, already you need four uplinks, usually operating at 10Gbps.

Third-party switches may also be plugged in and the Nexus 1000v is the most popular. It operates with a control plane, known as Virtual Supervisor Module (VSM) and distributed data plane objects, known as Virtual Ethernet Module (VEM). Cisco initially operated all control plane protocols on the VSM, including LACP, IGMP snooping. It severely inhibited scalability and now, control plane protocols are distributed locally to the VEM’s. It’s a feature rich software switch and supports VXLAN. You may also use the TCP established keyword, which is not available in VMware versions. Some of these products are free and others require enterprise plus license. If you want a free feature-rich standards-based switching product, use Open vSwitch, which is licensed under Apache 2.0. 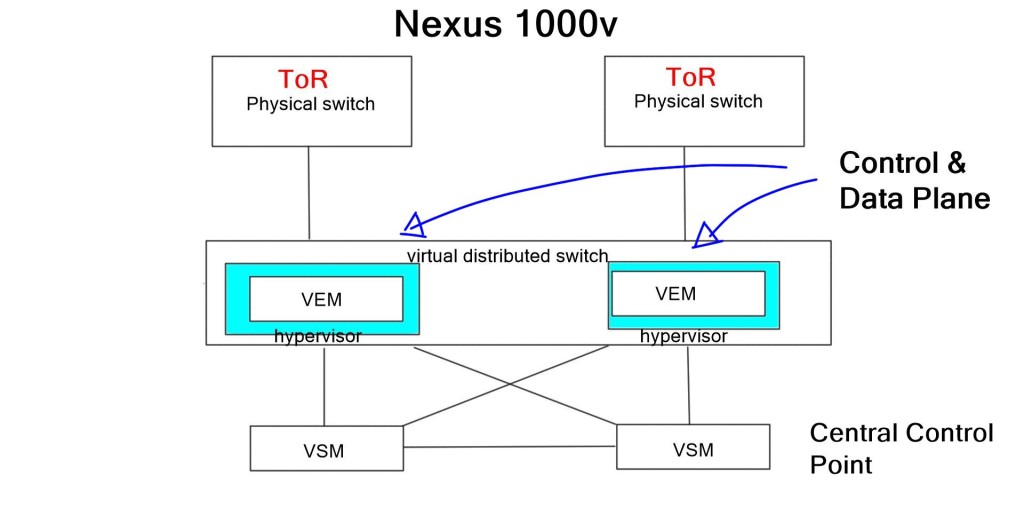 Open vSwitch is similar to VMware virtual switch and Cisco Nexus 1000v. It operates as a soft switch running within the hypervisor or as the control stack for switching silicon. For example, you can flash your device with OpenWrt and install Open vSwitch package from the OpenWrt repository. Both are standards-based. The following displays the ports on an Open vSwitch, and as you can see there are a number bridges present. These bridges are used to forward packets between hosts. For a free switch, it has a great feature set including VXLAN, STT, Layer 4 hashing, OpenFlow etc. 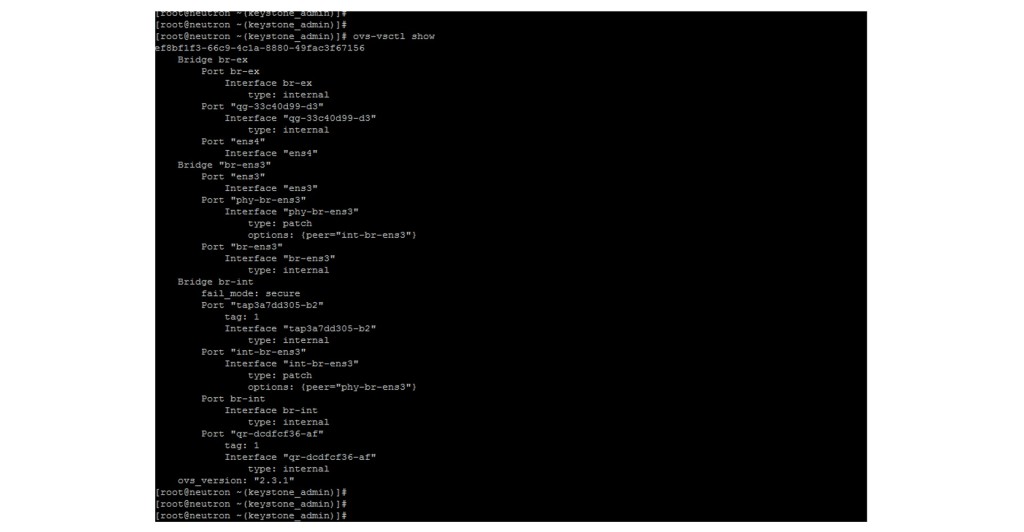 Challenges occur when VM’s need to move, resulting in a large VLAN sprawl. All VLANs configured on all uplinks creates one big switch. What can be done to reduce this requirement? The best case would be to integrate a solution that synchronizes the virtual and physical world. Any changes in the virtual world are automatically provisioned in the physical world. Ideally, we would like the list of VLANs configured on the server facing port adjusted dynamically as VM’s are moved around the network. For example, if VM-A moves from location-A, we want its VLAN removed from the previous location and added to the new location-B. Automatic VLAN synchronization reduces the flooding of Broadcast to servers, lowering the CPU utilization on each physical node.

Arista, Force 10 and Brocade have VMaware networking solutions on their ToR switches. Arista’s solution is called VMtracer, which is natively integrated with EOS and works across their entire family of data centre switches. VMtracer gives you better visibility and control over VM’s. It works by sending and receiving CCDP or LLDP packets to extract VM information including VLAN numbering per server ports. When a VM moves it is able to remove the old VLAN and add the new VLAN to the new ports. Juniper and NEC use their Network Management System to keep track of VM’s and update the list of VLANs accordingly. Cisco utilizes VM-FEX and a new feature called VM tracker, available on NX-OS. Cisco’s VM tracker interacts with vCenter SOAP API. It works with vCenter to identify VLAN requirements of each VM to track their movements from one ESXi host to another. It relies on Cisco Discovery Protocol (CDP) information and currently does not support Link Layer Discovery Protocol (LLDP).

There is an IEEE standard way to solve this called EVB and it’s supported by Juniper and HP ToR switches. It’s not currently supported by VMware virtual switches. To implement EVB in a VMware virtualized environment, you need to change the VMware virtual switch to either HP or Juniper. EVB use either VLANs or Q-in-Q tagging between the hypervisor and the physical switch. They introduced a new protocol called VSI that uses VDP as its discovery protocol. The protocol runs between the virtual switch in the hypervisor and the adjacent physical switch enabling hypervisor to request information (example: upon VM move) from the physical switch.  EVB is following two paths a)  802.1qbg and, b) 802.1qbh. 802.1qbg is also referred to as VEPA (Virtual Ethernet Port Aggregation) and 802.1qbh is also known as VN-Tag (Cisco products support VN-Tag). Both are running in parallel and attempt to provide consistent control for VM’s.

If you want to reduce flooding in the network core you need a protocol between the switches, allowing them to exchange information about which VLANS are in use. Cisco use VTP; design VTP with care. There is a standard layer 2 messaging protocol called Multiple VLAN Registration Protocol (MVRP). Unfortunately, it’s not implemented by many vendors. It automates the creation and deactivation of VLANs by giving switches the ability to register and de-register VLAN identifiers. Unlike VTP, it does not use a “client” – “server” model. MVRP advertises VLAN information over 802.1q trunks to connected switches with MVRP enabled on the same interface. The neighboring switch receives the MVRP information and builds a dynamic VLAN table. MVRP is supported on Juniper Networks MX Series routers and EX Series switches.