Network segmentation is defined as a portion of the network that is separated from the rest. Segmentation can be physical or logical. Physical segmentation involves complete isolation at a device and link level. Some organizations require physical division of individual business units for security, political, or other reasons. At a basic level, logical segmentation begins with VLAN boundaries at Layer 2. VLAN consists of a group of devices that communicate as if they were connected to the same wire. As VLANs are logical and not physical connections, they are flexible and can span multiple devices. 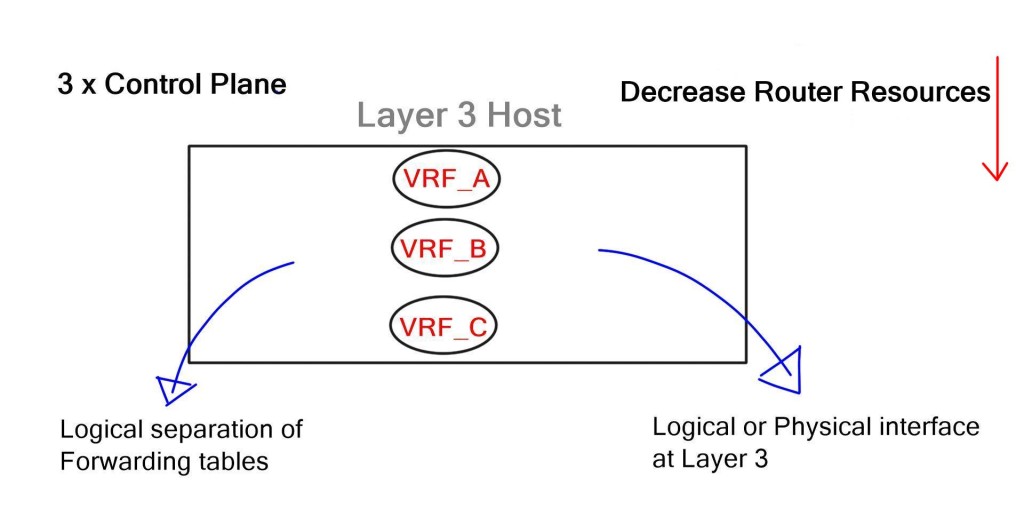 This supports a variety of topologies such as hub and spoke, partial mesh or any to any connectivity. While MPLS/VPNs have their benefits, they also introduce a unique set of challenges.

MPLS topologies, once provisioned, are difficult to modify. This is due to the fact that all the impacted PE routers have to re-provisioned with each new policy change. In this way, MPLS topologies are similar to the brick foundation of a house. Once the foundation is laid, it’s hard to make changes to the original structure without starting over.

Most modifications to VPN site topologies must go through an additional design phase. If a Wide Area Network (WAN) is outsourced to a carrier, it would require service provider intervention with additional design & provisioning activities. A simple task such as mapping application subnets to new or existing RT may involve onsite consultants, new high-level design and configuration templates which would have to be applied by provisioning teams. Service provider provisioning and design activities are not free and usually have long lead times.

Some flexible Edge MPLS designs do exist. For example, community tagging and matching. During the design phase, the customer and service provider agree on predefined communities. Once these are set by the customer (attached to a prefix) they are matched by the provider to perform a certain type of traffic engineering (TE).

While community tagging and matching does provide some degree of flexibility and is commonly used, it remains a fixed, predefined configuration. Any subsequent design changes may still require service provider intervention.

Applications Must Fit A Certain Topology

The model forces applications to fit into a network topology that is already built and designed. It lacks the flexibility for the network to keep up with changing business needs. What’s needed is a way to map application requirements to the network. Applications are exploding and each has a variety of operational and performance requirements, which should be met in isolation.

By moving from hardware and diverse control planes to software & unified control planes at the WAN edge, SD-WAN evolves the fixed network approach. It abstracts the details of WAN; allowing application-independent topologies. SD-WAN provides segmentation between traffic sets and could be a good way to help create on demand applications. Essentially, creating multiple on-demand topologies per application or group of applications. Each application can have its own topology and dynamically changing policies which are managed by a central controller.

The application controls the network design.

In SD-WAN, the central controller is hosted and managed by the customer, not a service provider. This enables the WAN to be segmented for each application at the customer’s discretion. For example, PCI traffic can be transported using an overlay specifically designed for compliance via Provider A. Meanwhile, ATM traffic can travel over the same provider network but using an overlay specifically designed for ATM. Meanwhile, each overlay can have different performance characteristics for path failover so that if the network does not reach a certain round-trip time (RTT) metric, traffic can reroute over another path. The customer has complete control over what application goes where and has the power to change policies on the fly.

The SDN controller, which acts as the brain, can set different applications to run over different paths based on business requirements and performance SLAs, not on a fixed topology. Each topology is segmented from the others and applications can share or have independent on-demand topologies. SD-WAN dramatically accelerates the time it takes to adapt the network to changing business needs.

The network topologies can be depicted either physically or logically. Common topologies such as Star, Mesh, Full, and Ring are categorized under a centralized or decentralized function. In a physical world, these topologies are fixed and cannot be automatically changed. Logical topologies may also be hindered by physical device footprints.

SD-WAN can flexibly cater to the needs of any type of application. In retail environments, store-specific applications may require a hub and spoke topology for authentication or security requirements. Surveillance systems may require full mesh topology. Guest Wi-fi may require local Internal access compared to normal user traffic that is scrubbed via a hub site. This per-application topology gives designers better control over the network. Viptela SD-WAN endpoints support multiple logical segments (regardless of the existing physical network), each of which can use a unique topology (full mesh, hub and spoke, ring) and be managed via its own policy.

Obtaining predictable services is achieved by understanding the per-application requirements and routing appropriately.

Traditional MPLS WANs, offer limited fabric visibility. For example, providers allow enterprises to perform traceroute and pings, but bits-per-second is a primitive and unreliable method for measuring end-to-end application performance. Instead, WANs should be monitored at multiple layers, not just at packet layer.

If a service provider is multiple autonomous systems (AS) away and experiencing performance problems, these cannot be addressed and detected using traditional distance-vector methods. This makes it impossible to route around problems and detect transitory oscillations. If errors on a transit path exist, a way must exist to penalize those paths.

Currently, there’s no way to detect when a remote network on the Internet is experiencing brownouts. Since the routing protocol is still operating, the best path does not change as neighbors might still be up. Routing should exist at the transport and application layer, and monitor both application flows and transactions. SD-WAN provides this function and delivers visibility at the device, transport, and application layer for insight into how the network is performing at any given time. This makes it possible to react to transitory failures before they can impact users.

“This post is sponsored by Viptela, an SD-WAN company. All thoughts and opinions expressed are the authors”