FabricPath Design in the Data Center

Cisco has validated FabricPath as an Intra-DC Layer 2 multipath technology. Design cases are also available where FabricPath is deployed for DCI ( Data Center Interconnect ). Regarding a FabricPath DCI option, design with careful consideration over short distances with reliable interconnects, for example, Dark Fiber or Protected Dense Wavelength Division Multiplexing (DWDM ). FabricPath designs are suitable for the range of topologies and unlike hierarchical virtual Port Channel ( vPC ) designs, FabricPath does not need to follow any particular type of topology. It can accommodate any design type; full mesh, partial mesh, hub and spoke topologies.

The problem with traditional classical Ethernet is the flooding behavior of unknown unicasts and broadcasts and the process of MAC learning. All switches have to learn all MAC addresses, which leads to inefficient use of resources. Ethernet has no Time-to-Live ( TTL ) value and if precautions are not in place could cause an infinite loop. 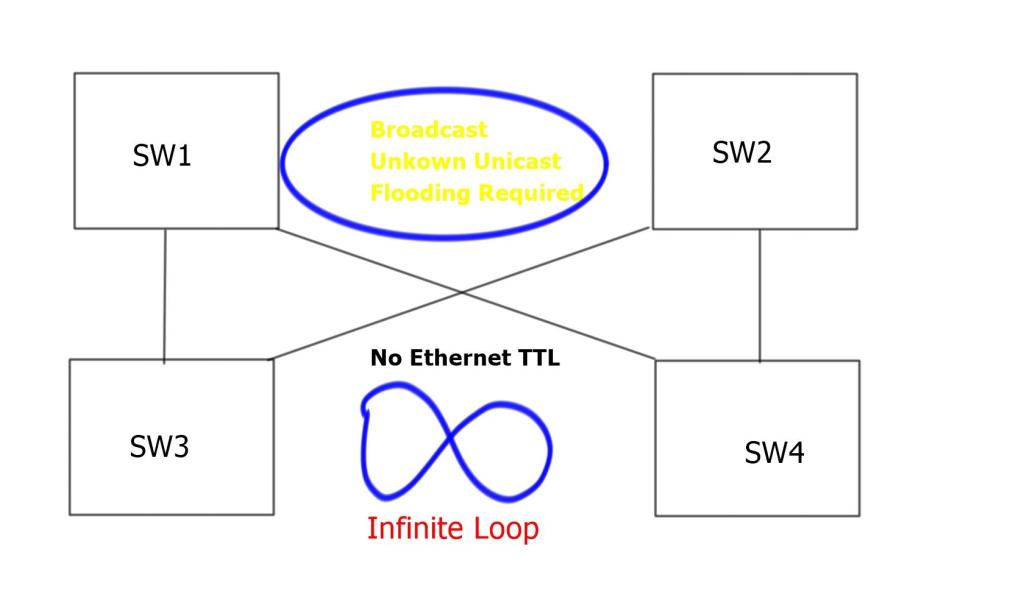 Deploying Spanning Tree Protocol ( STP ) at Layer 2 blocks loops but STP has many known limitations. One of its biggest flaws is that it offers a single topology for all traffic with one active forwarding path. Scaling the data center with classical Ethernet and spanning tree is inefficient as it leads to blocking all but one path. With spanning trees default behavior, the benefits of adding extra spines do not influence bandwidth or scalability. 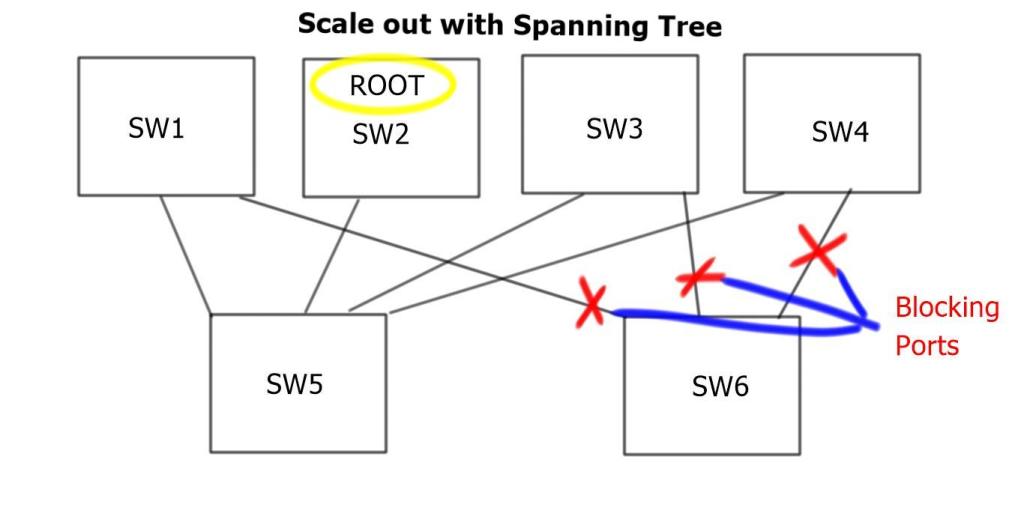 Another option would be to scale out with Multiprotocol Label Switching ( MPLS ). Replace Layer 2 switching with Layer 3 forwarding and MPLS with Layer 2 pseudowires. This type of complexity would lead to an operational nightmare. The prevalent option is to deploy Layer 2 multipath with THRILL or FabricPath.

In the context of intra DC communication, Layer 2 and Layer 3 designs are possible in two forms; Traditional DC design and Switched DC design. 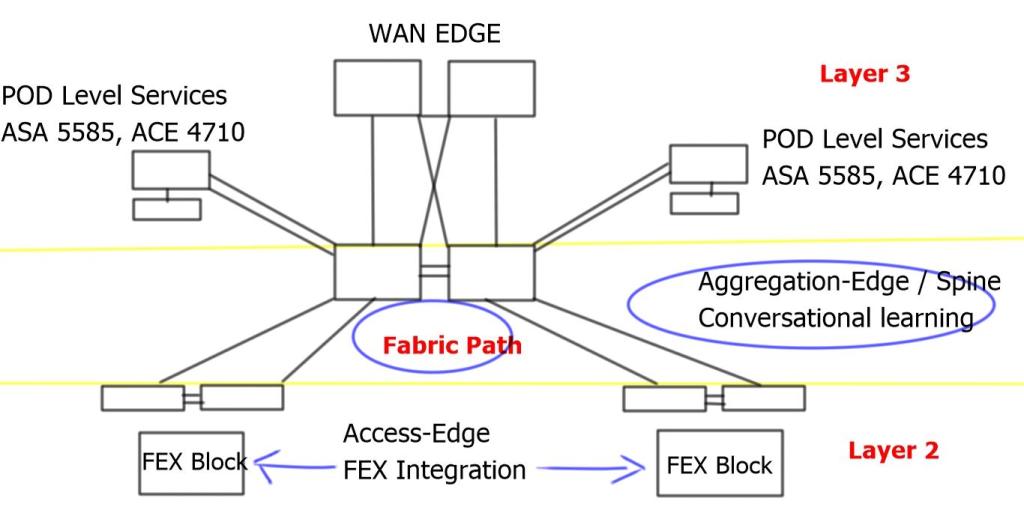 Fabric Path in the core replaces vPC. It still uses port-channels, but the hierarchical vPC technology previously used to provide active / active forwarding is not required. Designs are based on modular units called PODs, within each POD, traditional DC technologies exist, for example, vPC. Active / active ( dual active paths ) forwarding based on a two-node Spine, Hot Standby Router Protocol ( HSRP ) announces the virtual MAC of the emulated switch from each of the two cores. For this to work, implement vPC+ on the inter-spine peer-links. 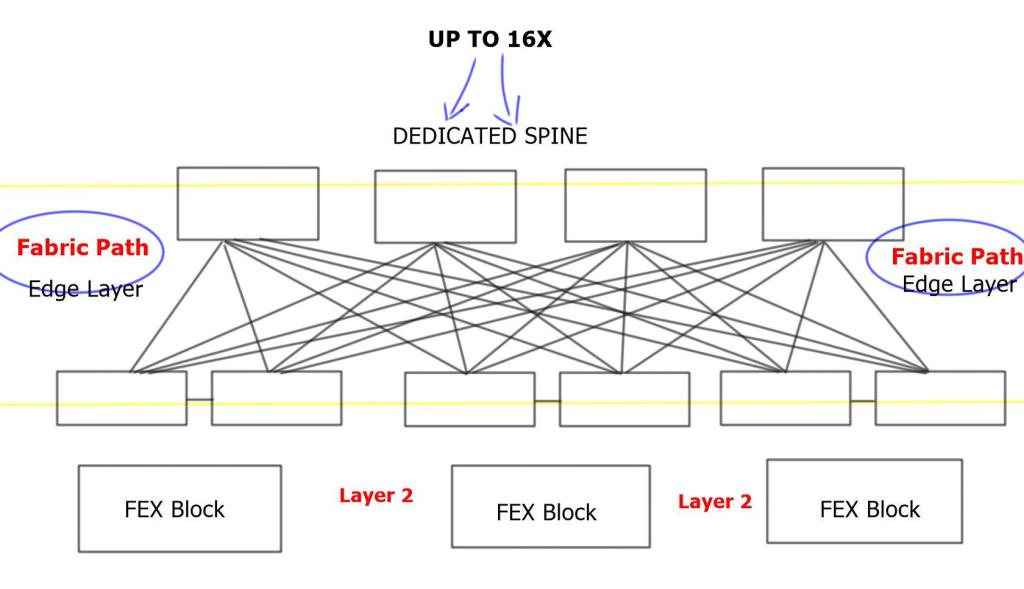 Each edge node has equidistant endpoints to each other offering predictable network characteristics.

From FabricPaths outlook, the entire Spine Layer is viewed as one large Fabric-based POD.

The traditional model presented above, port and MAC address capacity are key factors that influence the ability to scale out. The key advantage of Clos-type architecture is that it expands the overall port and bandwidth capacity within each POD. Implementing load balancing 4 wide spines present challenges to traditional First Hop Redundancy Protocol ( FHRP ) like HSRP, which by default works with 2 active pairs. Implementing load balancing 4 wide spines in conjunction with VLANs allowed on certain links is possible but can cause link polarization. For optimized designs, utilize a redundancy protocol designed to work with a 4-node gateway. Deploy Gateway Load Balancing Protocol ( GLBP ) and Anycast FHRP. GLBP uses a weighting parameter that allows Address Resolution Protocol ( ARP ) requests answered by MAC address pointing to different routers. Anycast FHRP is the recommended solution for designs with 4 or more spine nodes.